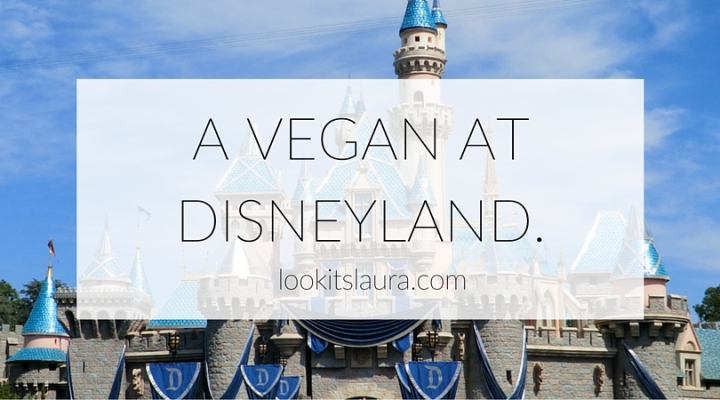 If you follow me on Instagram or Snapchat, I probably bombarded your feed with Disneyland posts last weekend. My friends were doing the Disney Run and since I have a annual Disneyland pass and Cara lives near the area (she also has an annual pass!), I decided to go to LA for Labor Day weekend. I told one of my friends about my Labor Day weekend plans and she asked me, “what are you going to eat there since you’re vegan?”. This is not the first time I’ve been asked this question. I think a lot of people have this assumption that since I’m vegan I can’t travel because well, I’m vegan. And since I was going to one of the most popular amusement parks, there’s no way Disneyland can accommodate my dietary needs… except they do 🙂

This year, I’ve been to Disneyland and Disneyland California 5 times and every single time, I’ve been able to find vegan friendly foods. 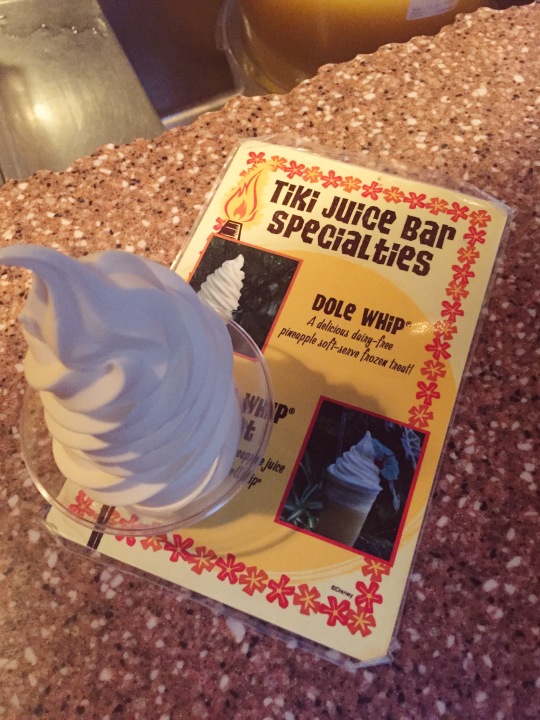 Yes ladies and gentlemen, Dole Pineapple Whips are dairy free!!! If Dole Whips weren’t vegan friendly, I probably would start ugly crying. I can only eat Dole Whips at Disneyland; I don’t care if yogurt shops have their version of Dole Whips, it’s just not the same. I think it’s because of the tiki atmosphere, I’m at Disneyland and I waited like 30 minutes to get one, I’m willing to spend $4 on a cup. If you’ve never had one, PLEASE DON’T DO THAT TO YOURSELF! They’re delicious, and it’s worth the wait. Or do what my friends do and go behind the tiki bar to get one.

Disneyland and Disneyland California started to offer healthy snacks at their fruit carts. Every time I’ve checked, there’s fresh fruit, dried fruit, trail mix, veggie sticks and hummus packets. I’m a hummus addict so I am extremely thankful when my hunger strikes. You can find these snack carts everywhere. Here are some of the locations you can find them:

When I went to Disneyland in January, my friends and I ate at the Wine Country Trattoria— which is located in Disneyland California. I got the Broccolini Aglio Olio; it’s a pasta that has spinach, arugula, tomatoes, garlic, chili flakes and is cooked in olive oil. I thought it was good; there was quite a bit so you can share it with your friends. This place is a bit pricey but when you don’t want to eat “park food” you’re willing to spend the money. Also you’re at Disneyland, you’re going to be spending money in general.

Cara and I went to La Brea Bakery to get lunch last week. La Brea Bakery has a kale salad that has grapefruit, pistachio, avocado and citrus vinaigrette. I enjoy eating salads so I really liked it, but again that’s just my personal opinion. If you don’t just wanna eat a salad, order another item! Cara and I split the kale salad and Roasted Vegetable pizza without cheese.

Not feel like eating America food in Downtown Disney? Tortilla Jo’s has a yummy veggie burrito, fajitas and a house salad! Most of these items are vegan friendly, just make sure if you order the fajitas don’t get it with refried beans, sour cream and cheese. If you want something cheaper, Taqueria at Tortilla Jo’s has a a vegetarian burrito! Just order it without cheese and you’re good to go 🙂

Disneyland is know for being the happiest place on earth (except in prices). If there’s something on the menu that you have questions about or want something to take off, I’m pretty sure they’ll be willing to. Don’t be afraid to ask! These are just some of the items that I’ve found; if you want to see or want to know more, let me know! I’m wiling to check it out! Thank you so much for reading, if you liked today’s blog post, please click the like button and don’t forget to subscribe! I post every Tuesday and Thursday with an occasional weekend post.

P.S. I’m totally fine getting vegan questions! It actually makes me happy because I know my friends are worried about my well being. Also if anyone has any vegan questions, please fill free to ask! I’ll try to answer them as best I can or I can send you to one of my other vegan friend’s blogs 🙂

3 thoughts on “A Vegan at Disneyland.”